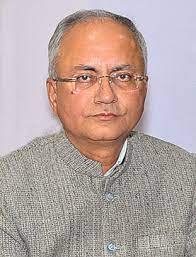 He is the 7th State Election Commissioner of Himachal Pradesh and belonged to 1986 Batch of IAS from Himachal Cadre. He retired as the Chief Secretary of the State.

He is an alumnus of St. Stephen’s College of Delhi University and Delhi School of Economics. He has a rich administrative experience of 35 years. He has held several important assignments in the State of Himachal Pradesh such as Deputy Commissioner, Kullu, Excise and Taxation Commissioner, Secretary Finance, Food & Civil Supplies and Labour, Managing Director of HP State Industrial Development Corporation and Himachal Pradesh Financial Corporation. Prior to his Central deputation in June, 2010, he was Chief Electoral Officer and successfully conducted the 2009 Parliamentary Elections. He has served as Additional Chief Secretary, Finance, Planning, Economics & Statistics and 20 Point Programme to the Government of Himachal Pradesh.

In Delhi he has served as Deputy Director General in UIDAI where he was responsible for the design and rollout of the enrolment eco-system for AADHAR. He was also instrumental in developing protocols for all enrollment related activities of the Project. After 3 years stint with UIDAI, he moved as Joint Secretary in the Ministry of Labour & Employment where he was tasked with all matters related to child labour and women labour, besides looking after the administrative and coordination issues of the Ministry. The amendments to the Child Labour Prohibition Regulation Act (Regulation), 1986 were piloted by him through the Parliamentary Standing Committee and Ministry of Law and Justice. He was also instrumental for initiating work on amendment of the EPF Act and conceptualizing and initiating work on a composite Labour Act for Small and Medium Enterprises. He has also served as Secretary, Department of Investment and Public Asset Management, Ministry of Finance. He has also served as Chief Vigilance Officer in Food Corporation of India.